LET’S COLLECTIVELY BUILD A FUTURE WHERE WE ALL THRIVE

As the debate and widespread fear about transgender participation in sports sweeps across the country, trans athletes are out here doing what they’ve been doing their whole lives: keeping their head in the game. It isn’t easy being a trans athlete in this climate. Over the past two years, transphobia has shape-shifted into the latest wave of political attacks that target transgender athletes at multiple levels of competition. Transgender inclusion in sports and athletics has become a divisive battleground that leaves many athletes in the lurch.

While national lawmakers and sports pundits debate our fundamental rights, nonbinary and transgender athletes are just trying to stay focused on what they love—sports. Cecé Telfer, the 27-year-old Jamaican-American track star who became the first openly transgender athlete to win an NCAA title, is no different. Despite all the noise, every day is another chance to wake up, stay hydrated, and train hard. We sat down with Cecé to discuss her love for track and field, how she takes care of herself in this political climate, and the advice she has for the next generation of trans athletes.

Mud: Have you always been into athletics? What did sports mean to you growing up?

Sports kept me sane growing up. They kept me out of trouble and focused on the things I need to be focused on. When it comes to academics and really holding myself accountable, track and field helps me enormously. Before I knew about transitioning, my mental and physical state weren’t in alignment. Being an athlete is hard when you’re in that state, but being on the track, doing what I do, keeps me away from that mental and physical battle.

You also get a lot of respect from being an athlete. No matter who you are, regardless of your sexual orientation or your gender, if you're a great athlete, people look up to you because you’re good at what you do—especially when you're on a winning team, and you're helping that team win.

Mud: When did you start running?

Cecé: I started running at a really young age. Track and field is huge in Jamaica, they start you off in preschool. And they incorporate track and field with math. For example, if you had an exam, they place the math questions 50 meters out. You have to run to the equation, solve it, and then run back. The first person back doesn’t win unless you got the answer right.

I just thought that was so cool! I didn’t know the answer to the math equation but I wanted to win. I wanted to get across that finish line with the right answer.

Mud: When did you start competing?

Cecé: I started competing in middle school. At that time it was more mixed, more co-ed, rather than segregation of the sexes. I could still be with my girlfriends, and we could be on the same team, which was more fun for me. Now that I’m thinking about it, that was actually really mentally good for me.

Mud: Yeah, you could just be one of the girls, which you are—

Cecé: —you know? That's what I'm saying— I belong here.

Mud: Yeah. It's not that hard. So would you say you're a competitive person?

Cecé: I would say that I started to become a competitive person in high school. I played different sports too, but always ended with track and field because of summer. I would travel back and forth between Canada and Jamaica in winter and fall, but I always came back to track at the end of the year—it was my sport. I knew I was going to thrive.

Middle school was about having fun, getting involved in sports, being around people, and learning. But then came high school, where you actually have to try. You want to win because if you win, we all win. I loved that we could all win. And that’s where it started.

My mom was a single mom, and she’s Jamaican. I grew up in a very strict household where there was no flamboyancy allowed. But regardless of what anybody said, I always saw myself as a female athlete competing in the sport that I loved. I tuned out the noise on the track, and I tuned out my anxiety as well. 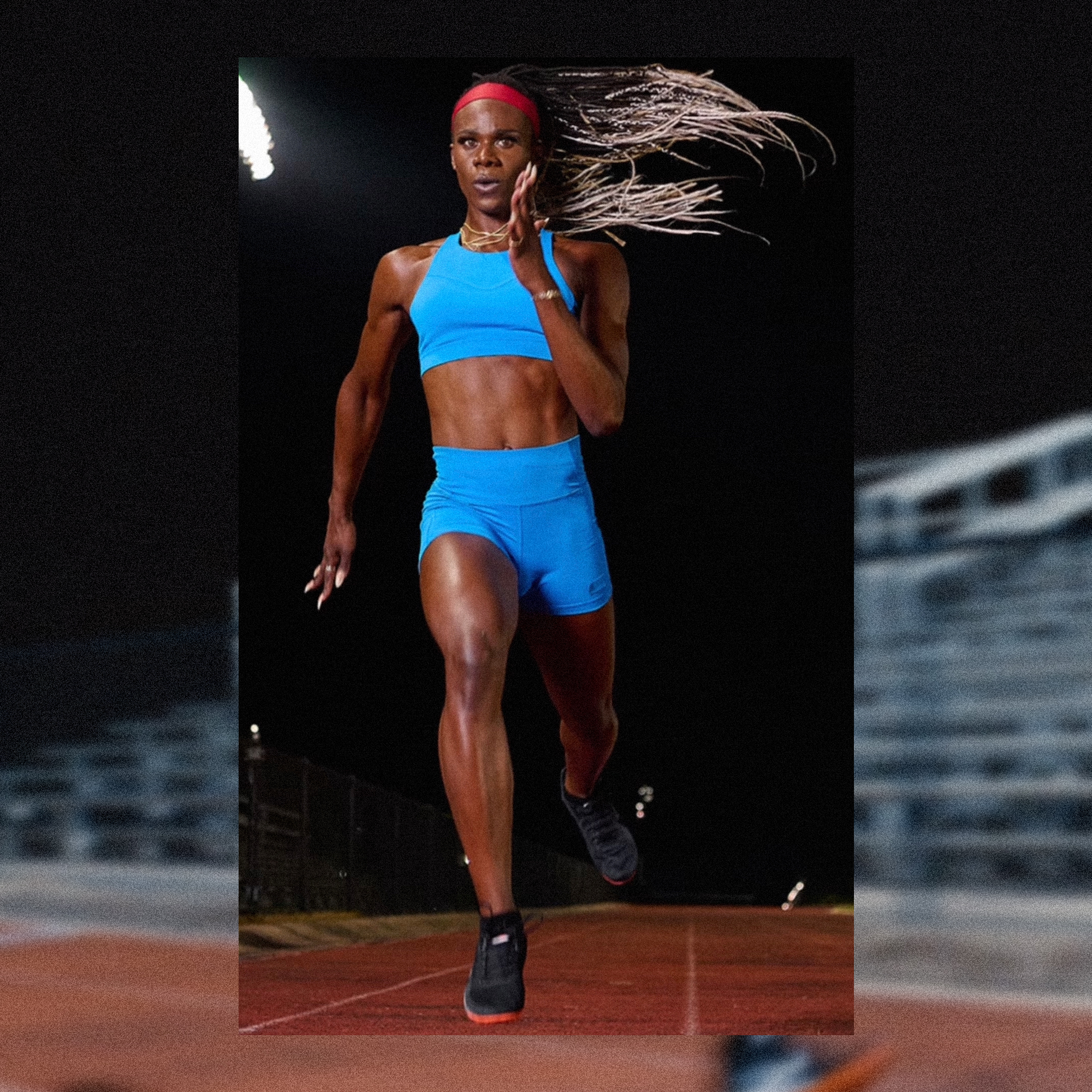 Mud: I love that. There is often this ”before and after” narrative around transitioning when a lot of us have always been this way, we just didn’t have the language for it.

Cecé: Right. That's what I want to reiterate when people ask me, “When did you start your transition?”

Like, when did I start? What do you mean? I was always a female. My parents might not have liked it, but I was always female. I showed them signs, it’s not like they didn’t know.

Mud: That’s so true. The mental gymnastics that people have to go through to deny what is already real.

Cecé: Exactly. I feel like a lot of parents really try not to see, you know? And it's funny, because when you do finally come out to them, they're like, “Oh, we've had a feeling” or “We knew” And I’m like damn, you were just holding out and hoping it wasn’t true? You made me suffer this whole time, and for what?

Mud: While there isn’t really one moment in which we transition, how did your relationship to track and field change after you publicly came out as a trans woman?

Cecé: My relationship with the sport definitely changed because the track world finally saw me for who I was. I could stop holding my breath the whole time, finally, just focus on what’s important and execute.

It’s crazy because other people always saw me as a female competing. They were asking, “Is that a girl?” Everyone was always saying things, so don't act like y'all didn't know! And it wasn't a problem when I was competing [in men’s sports]. But now that I’m living authentically in myself, it's a problem.

I think another part that changed for me, was seeing how accepting the NCAA—National Collegiate Athletic Association—was and how they were able to uphold their truth and be true to their mission of protecting athletes. They saw me as a female athlete and dedicated their mission to protecting me. Going to nationals and winning that national title changed my life and I didn’t even know the things the NCAA was doing to protect me until afterward.

It's very emotional for me because of everything that is going on in the world. I really hope that the NCAA continues to uphold its mission in protecting athletes and that transgender and nonbinary athletes have a place to compete in college like I did.

Athletes like myself deserve a chance to compete in college. We deserve chances to become professional athletes. People need to understand that athletics keeps us sane and healthy, it keeps us from harming ourselves and taking our own lives. This is our truth that we are trying to live. So I hope that the NCAA doesn’t change its stance.

Mud: That’s amazing that they did so much to protect you. That’s how it should be. What do you think is the biggest misconception people have about trans athletes?

Cecé: There are so many. I think the number one misconception people have is that trans women have an advantage over cis women in sports. That’s just false. There are rules and regulations in place to even be able to compete in the first place—which is a whole other conversation, but we do what we have to in order to play.

We have to undergo invasive medical processes while other [read: cis] female athletes who are actually producing high levels of testosterone, who are thriving and doing well, don’t have to. Meanwhile, our muscles are breaking down, our bone mass is becoming brittle, like, I’m getting faint spells and dizzy on the track because of the changes in my biochemistry.

No matter what they still see my presence as a threat. If you really wanted to know the facts, you would get involved and educate yourself and know that we do not have an advantage. We actually have a disadvantage in competing in sports, especially on the professional level.

If you really wanna talk about fairness, talk about testing every female and every male athlete and hold everyone accountable to a certain range of hormones. Hold the same standards for everyone. The common example that is used for men is Michael Phelps.

He’s praised for his advantages, such as his wing span because he was born that way. Well, I was born this way. But you’ll never accept that because I’m not a cis male.

Mud: Right. You can’t make it about biology, but then make exceptions for some people’s biology…

Cecé: It’s not about biology. Trans people are such a minority, there are so few of us. How can we be a threat to women’s sports when we are women ourselves? If anything, we should be accepted and embraced because we are trying to diversify and create an inclusive environment for other female athletes of different bodies to be a part of the movement. Do you know what I mean? It just blows my mind. 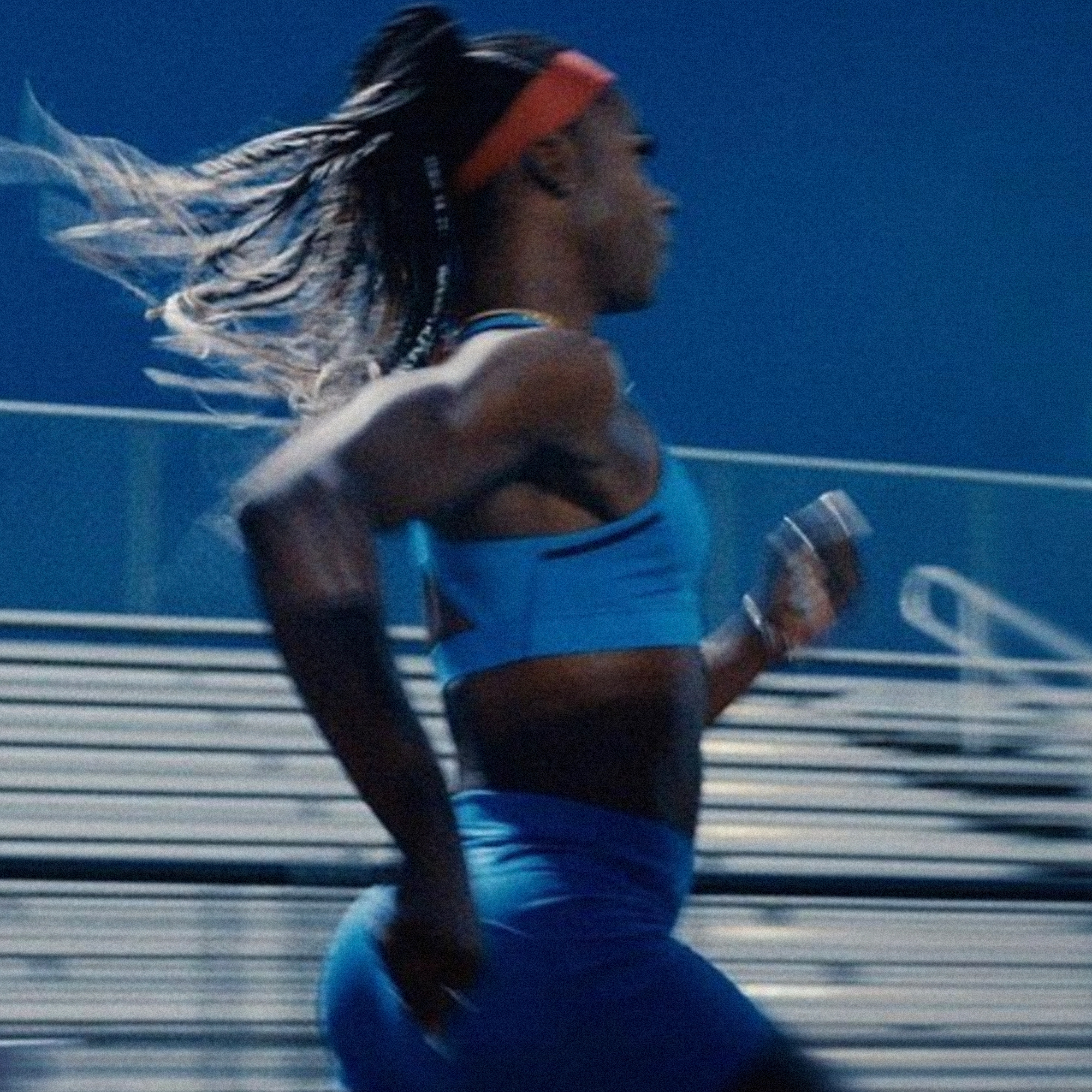 Mud: We touched on this a little bit earlier, but in this current climate of so much anti-trans bias, especially in the world of sports and media, how do you take care of yourself? On a personal level, what are the things you do to look after yourself?

Cecé: Honestly, thank you for asking that question. I try to stay off social media and stay away from my inbox. I try to focus on the positives and rely on my support groups and the people who really love me.

I try and do the things that make me happy, whether that is getting my nails done or just getting a little bit of extra sleep, or spending more time with my friends. It’s hard but I’m trying to stay strong for the little Cecés out there who are growing up and seeing my representation. I’m trying to stay positive so that they can see everything is going to be okay.
Cecé Telfer

Mud: What is something that you want trans youth and young trans athletes to know?

Cecé: My best advice to the young trans and nonbinary athletes out there is [to] never give up. There is absolutely a place for you.

I’m doing this so that you can see me on that stage and know that there is somebody out there who looks like you. I’ve gone through the same things that you have and still made it out alive, well, and healthy. No one can break you but yourself.

Surround yourself with the people who love you the most because at the end of the day, they are the ones who matter. They can protect you from the noise out there.
Cecé Telfer

I’m getting emotional all over again, but you know. We are fighters, and that makes us strong.

Mud: Exactly. What we’ve had to go through just for the right to exist gives us this inner strength and magic. We are healing this world. Beyond just being strong and being fighters, our presence is literally a healing gift to everyone out there.

Cecé: Right! And other people see us living our truth and that gives them permission to live theirs. We are setting people free. I consider myself a Christian, too. No one is going to tell me that God doesn’t love me, because I know that I am God’s favorite. I’m still alive. God gives his toughest battles to his strongest warriors.