Illustrations by Rory Midhani.
This article was reviewed by Jess Schwab, DNP.

Even though gender-affirming hormone therapy has been around for nearly 100 years, there are still many misconceptions about the effects of HRT on transgender people. When you realize most of what the general public (and the medical profession) knows about transgender and nonbinary people comes from the media—it’s no wonder that we often know more about our bodies than most medical providers do. We’ve all seen the trainwreck representation where some girl misses one dose of estrogen and is suddenly one second away from becoming a complete hormonal wreck. The fear of transgender people medically transitioning runs deep in our collective conscience.

I really was afraid for the longest time to come out. I did a lot of my own research prior, but I didn’t feel as if I had the proper information.

Luna Lovebad spoke to us about the apprehension she had before starting HRT. “I really was afraid for the longest time to come out. I did a lot of my own research prior, but I didn’t feel as if I had the proper information. One of the biggest misconceptions I had before starting estrogen was that it is an irreversible process.” While there are certain changes that are permanent, HRT is not a life sentence. Everyone’s experience on HRT is unique and varied. While some people might experience nuanced and subtle emotional, physical, and psychological changes, there are many misconceptions that people believe are automatic outcomes of taking hormones. So before you get lost on a forum on the deep web reading horror stories about estrogen HRT, read our article. We’ve compiled a list of the top 9 myths that are out there about E and worked with our trusted clinical team to explain each one. We want to make sure that you are empowered with the real information on estrogen and what changes you can and can’t expect on HRT.

1. Taking estrogen means you will be hysterical and emotionally out of control.

As if the sexist tropes of a cisgender woman on her period weren’t enough to make you cringe, there is this idea out there that estrogen is some hysteria-inducing force that will make any transfeminine person break down over a broken nail. While some people do experience changes in their emotional landscape, these hyperbolic stereotypes usually come from a deep belief that views women (and femininity) as emotionally unhinged and dramatic.

It’s natural to be worried about how and if your emotional experience of the world will change. One of our FOLX clinicians, Dr. Kameryn Lee, who has practiced gynecology for 17 years and thus spent her whole career discussing estrogen, weighs in on this one.“ Every cisgender woman and trans person on estrogen would be incredibly insulted by the notion that estrogen makes people hysterical. While hormonal fluctuations can cause mood changes in some people, research studies consistently show that gender-affirming hormones improve mood and mental health for trans people.”

For many, taking estrogen allows them for the first time to actually feel their feelings, perhaps emotions that were always there but remained buried.

This can often be experienced as a welcome change from the numbness that many transgender women report feeling before going on hormones. Jess Schwab, DNP, weighs in: "A lot of my members have some concern about how beginning GAHT may affect their mood, but the majority of them report feeling an overall improvement in their mood and outlook after starting these medications.”

2. You will lose your sex drive/libido.

Sex drive is a highly individualized and relative thing. It’s important to know that no one truth applies to the connection between libido and HRT. Some people experience changes in sexual drive, but this is more likely due to decreased testosterone levels due to testosterone blockers. Everyone has a different response to hormones, so it’s important to know that your desires or what gets you sexually aroused might change as a result of taking estrogen, the same way these things might shift and change due to other circumstantial factors in our lives. No matter what, you can always talk to your healthcare provider if this is something you experience.

3. You won’t be able to get someone pregnant.

This is a common misconception that many people have before starting HRT. It’s important to know that hormone therapy is not an effective form of birth control and you can still get people pregnant, even while on estrogen. So make sure to use condoms and other forms of birth control if you are having the type of sex that can result in pregnancy.

4. You will lose your ability to have biological kids.

While estrogen HRT can decrease your fertility, the truth is, the medical community doesn’t have any real and meaningful data on the long-term impact of estrogen HRT on transgender women and transfeminine people’s ability to have biological children. Courtney Rawls, one of our nurse practitioners says, “I have heard cases where people on HRT go on to conceive after being on hormones for some time. I like to advise members that hormone use could potentially impact their ability to conceive using your own genetic material, but there are ways to preserve sperm prior to starting estrogen.” If this is something that’s important to you,  please speak with your healthcare provider.

5. You will get blood clots and have strokes if you take estrogen long-term.

This is a big fear that our clinical team hears often from folks who want to start estrogen HRT but are worried about the health risks. A recent study found that while the rate of blood clots for transgender women on estrogen was higher than the general population, they are lower than the estimated rate in premenopausal cisgender women taking oral contraceptives. In short, estrogen HRT increases the risk of blood clots but no more than birth control pills do. While the chance of developing a blood clot or having a stroke is low, it’s important to know that some people are at an increased risk (such as people who smoke or have a history of heart disease or blood clotting disorders, to name a few). 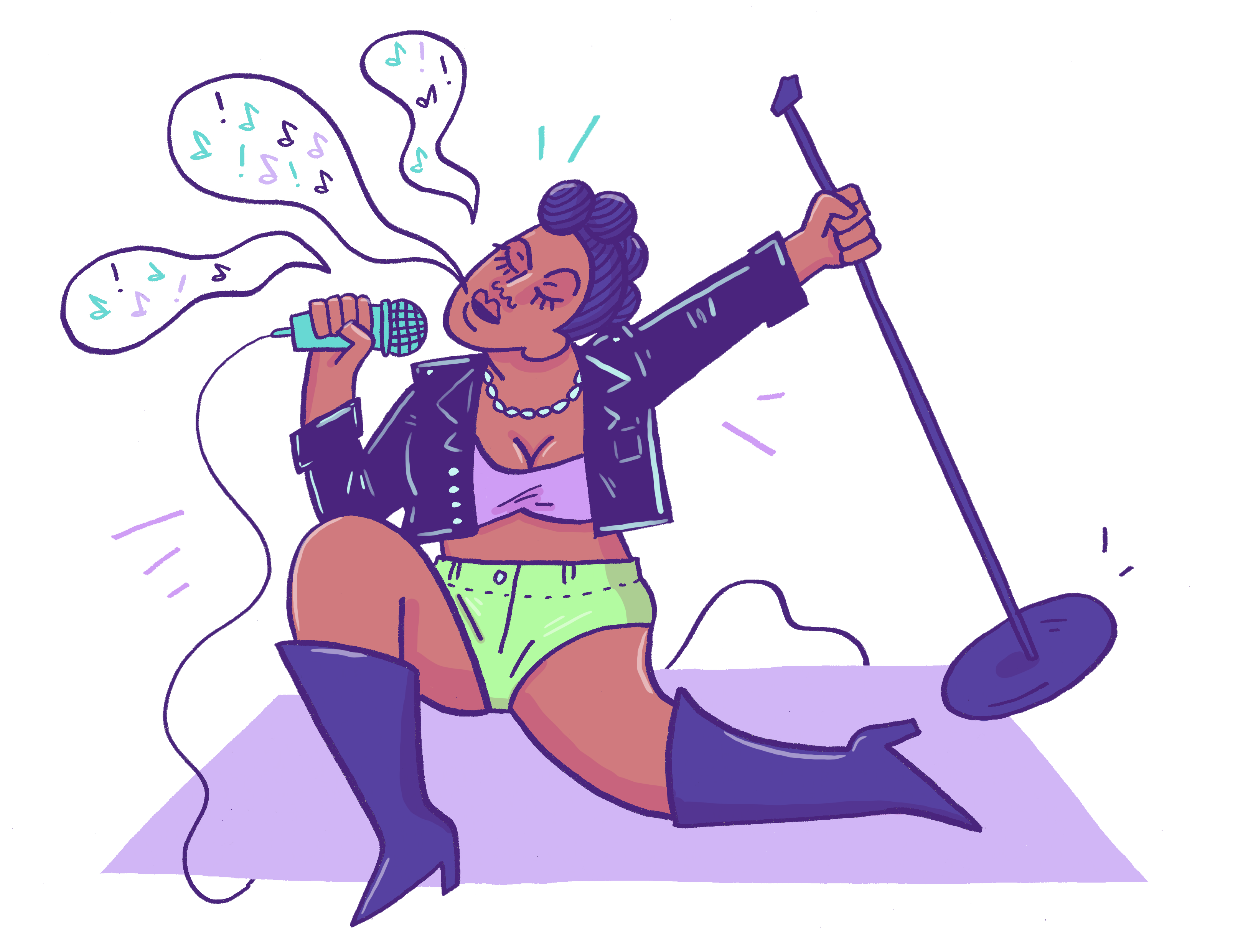 6. Estrogen will change your voice.

Estrogen will change many things, but unfortunately, vocal cords aren’t one of them. If you were assigned male at birth and weren’t on hormone blockers as a teenager, testosterone would have thickened your vocal cords, which deepened your voice. There are some hormonal effects that are permanent such as testosterone thickening vocal cords or breast development. But if altering your voice is important to you, voice therapy is always an option. If you are looking for a more permanent change, there are surgical options available as well.

7. Estrogen will make you shorter or your feet or hands smaller.

Bone structure is also something that cements during our first puberty so—unless you took hormone-blockers as a young person—taking estrogen later in life shouldn’t affect things like height or shoe size as your skeletal structure has more or less solidified. This being said, some people might notice changes due to muscles, tendons, and ligament alterations which can subtly change the shapes bones are pulled into. The same goes for things such as facial and body hair, although the texture and thickness might reduce, estrogen will not eliminate hair growth.

8. You have to tell people the second you start taking estrogen because everyone will notice.

Many trans feminine and non-binary people put off starting estrogen because they aren’t ready to come out to the world. There is often a belief that once you start hormones, somehow everyone will suddenly know. We are here to tell you that this isn’t true. Sometimes, people may notice something different about you, but often they can’t put their finger on it. Many people decide to start estrogen HRT and then tell people once they are ready. The reality is that HRT is a gradual process that changes things slowly, day by day. You don’t have to tell anyone that you are on hormones unless you want to.

9. HRT is an irreversible process and linear experience that you have to be on for life.

It’s a common experience to get caught up in the ‘what-ifs’ of starting hormone therapy. It can be difficult to sort out what is internalized transphobia and what is genuinely the right decision for you. Luna told us, “I just wish I would have started sooner and not let fear stop me. It’s a slow and gradual process and you'll be much happier if it is something you truly want.”

The most important thing to remember is that you are in control of your relationship with your body. Some people take a low steady dose forever while others take a higher dose for a while and then stop or have periods on and off estrogen. Hormones are just one part of some people’s transition. It’s your gender and ultimately your decision for what path you take. It’s always best to talk with your provider to understand which effects are more permanent and which ones are reversible, but either way, just know that your transition is in your hands.

For those ready to get started with FOLX for estrogen, the process begins here. For existing FOLX members with questions about testosterone, don't hesitate to schedule time with a clinician. And for those who’ve just got some more questions, read up on estrogen here or feel free to reach out to us at support@folxhealth.com.

What Physical Changes to Expect on Estrogen Hormone Replacement Therapy, Explained by FOLX