Polycystic ovary syndrome (known as PCOS) is a condition found in some folks assigned-female-at-birth that causes people to produce “higher than average” levels of testosterone. This hormone imbalance is often seen as a negative condition in need of correction as it can affect menstruation, fertility, and other changes such as hair growth amongst other things.

For transgender, non-binary, and other gender-expansive people who are on testosterone hormone replacement therapy (HRT), T is often experienced as a euphoric, gender-affirming hormone because of the changes it produces: deepening the voice, increased facial and body hair, increased muscle size and strength, increased strength, and a higher sex drive.

For AFAB people who aren’t on HRT, raised testosterone levels can sometimes be seen as a red flag because it's usually one of the first signs of PCOS. The elevated levels are usually very subtle elevations in androgens, within two times the upper limit for what is considered “normal” for people assigned-female-at-birth.

The common denominator here is that folks that have PCOS and folks on HRT both have elevated levels of testosterone; however, they are two completely separate medical conditions. FOLX clinician and nurse practitioner Courtney Rawls says, “It’s important to note that going on HRT can’t give you PCOS. PCOS is a metabolic condition that is diagnosed based on multiple diagnostic indicators," HRT is a gender-affirming process where folks choose to induce higher levels of T to bring about specific results. The presence of elevated testosterone alone does not warrant a PCOS diagnosis."

So what does warrant a PCOS diagnosis? In order to receive a PCOS diagnosis, you must meet two of the three criteria: infrequent menstrual periods, androgen excess (more testosterone), and/or polycystic ovaries. Polycystic ovaries develop with infrequent menstruation when the follicles that develop on the ovaries grow over time without the consistent releasing of eggs and eventually appear as cysts visible on an ultrasound. While doctors' concern towards elevated levels of testosterone in folks AFAB can be helpful in making sense of any medical conditions, or as one component of a PCOS diagnosis, this can also further perpetuate harmful gender stereotypes, since these naturally elevated levels of T can often produce side effects that are against cisgender and heteronormative assumptions about health, wellness, and beauty.

Because these attributes don't align with our societal expectations of what femininity should look like, the physical changes that come from elevated levels of T are often assumed to be a negative thing in need of correcting. Furthermore, while cisgender women who have PCOS might experience these attributes as bothersome or negative, it doesn’t mean that everyone does, nor that the treatment to bring down androgen levels won’t cause other responses in the body.

Much of what we know about hormones is based on cis-centric averages and ranges labeled as “normal” for cisgender men and cisgender women.  And while these can sometimes be useful benchmarks to keep a person’s physical, emotional, and psychological state in balance—this should also depend heavily on how a person feels about their body and mental state.

For example, as a cis woman with PCOS, I've been told to worry about my testosterone levels because I have more hair in places where cis women "shouldn't" have hair, my voice is a little low, and my sex drive is slightly higher than average. Even though growing up, this never bothered me. In fact, I enjoyed coming across as more androgynous. My first OB/GYN was concerned that I was overlooking gender norms that ultimately didn’t matter that much to me. Obviously, I'm not discrediting OB/GYNs, as with my case there were more concerning medical issues behind my PCOS diagnosis besides my physical attributes.

But this is all to say that the way we talk about hormones and hormonal conditions is systemically gendered.

Even in the queer and trans community, the gendering of hormones gets lost on us. Some folks still believe that all trans women take estrogen while all trans men take testosterone. For example, OHSU's Transgender Health Program describes hormone therapy as "medication to increase or suppress feminine or masculine hormones."

There is no such thing as ‘masculine hormones’ or ‘feminine hormones.’ While some people might equate testosterone with masculinity and estrogen with femininity, many people take testosterone and estrogen HRT for different reasons. Regarding things as inherently masculine or feminine do very little to free us from binary notions of gender identity.

Often, conditions like PCOS are treated based on the “ideal balance” of estrogen and testosterone in people assigned female at birth, which can be misleading when each person’s experiences of their hormonal levels and how they feel are different. Everybody is different and hormones should be treated as such. 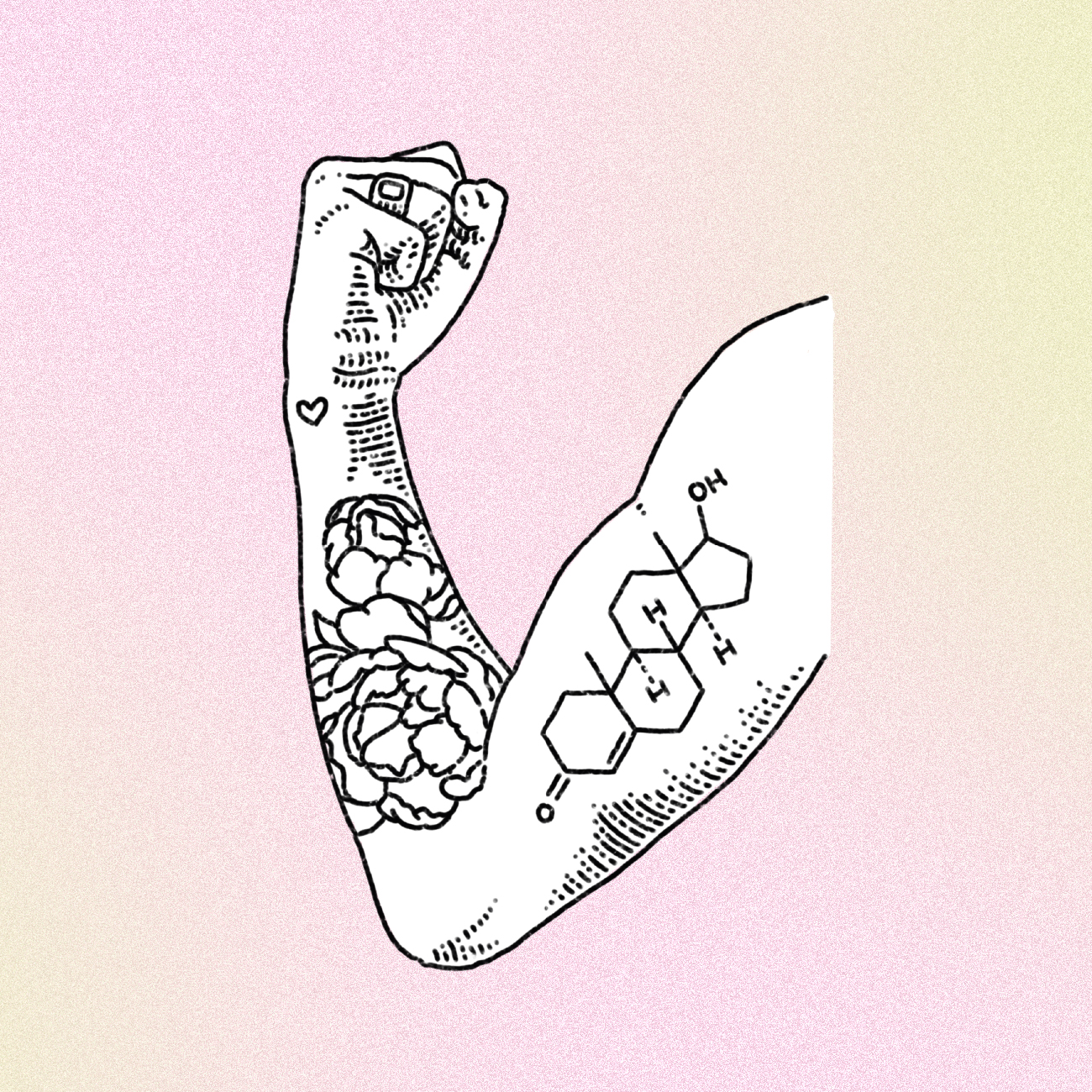 What if folks with PCOS want to go on testosterone HRT?

Those who decide to go on T need to be aware of their previous testosterone levels and potential history with PCOS. As with starting any sort of treatment or medication, assessing your current medical history will help your healthcare provider evaluate the effects and interactions once starting testosterone HRT. However, clinicians at FOLX do not require members to report a PCOS diagnosis to get pre-T labs drawn. This isn’t necessary because the levels of testosterone a person with PCOS has are still lower than what we will look for after they get started on HRT.

It’s important to note that a diagnosis of PCOS will not prevent someone from getting gender-affirming care.

If someone with PCOS starts using HRT, will they be at higher risk for certain health issues, and/or will this increase the physical effects of testosterone on the body?

While testosterone is present in folks with PCOS and in folks taking HRT, they occur at very different levels. According to Courtney Rawls, “people with PCOS don't have elevated levels of testosterone high enough to bring about the changes that happen with folks that are taking gender-affirming hormone therapy (GAHT)." The increased levels of T that occur in people with PCOS are very marginal compared to the average doses of T administered through GAHT.

Yes! Naturally occurring testosterone and gender-affirming testosterone (such as testosterone Cypionate and Enanthate) are made up of the same bioidentical molecule. This means that while one is naturally produced and the other is taken via injection or gel, they interact in our bodies the same way.