“Today is my daughter’s first day of high school,” Carter Brown tenderly mentioned over Zoom. The first-time father, husband, and founder of the National Black Trans Advocacy Coalition (BTAC) was calling from his home in Dallas, Texas, which arguably is one of the worst states in the country right now to be Black and transgender.

In spite of this, Carter, who was named in 2020 as one of the most influential African Americans, is committed to advocating for the empowerment and equality of his Black transgender brothers, sisters, and siblings, and has been for over a decade. This year, BTAC celebrated their tenth anniversary, a lifetime for a nonprofit organization that relies on community mutual aid and the occasional corporate donor to fund life-saving care, housing, food, and employment opportunities for the communities who need it most.

Carter was compelled to found Black Transmen, Inc. (BTMI) in 2011 after his experience being a Black trans man who was outed at work and subsequently harassed and fired. After seeing the critical need for resources and basic services through BTMI, the group gave birth to Black Trans Women Inc. in 2012 and Black Trans MX in 2018. Collectively, these three organizations make up BTAC, the first national nonprofit organization dedicated to serving Black transgender people. BTAC is also FOLX’s partner for our HRT Care Fund, which helps to provide a year of gender-affirming hormone therapy to transgender, nonbinary, and gender nonconforming Black, Brown, Indigenous, and people of color.

We sat down with Carter to talk about gender-affirming care as life-saving care, intra-community support with LGBTQ people, and raising a child as a trans parent. Kai: If you had to situate us in this current moment, where would you say we are right now?

Carter: We’re in an odd place. We’ve made a lot of progress as far as transgender healthcare, accessibility, and knowledge about our community’s health. But with the current anti-trans bills, all of the progress might be completely reversed. Not long ago, no one cared about us. Now, our lives are a primary focus in politics. That’s why it’s important for us to be in collaboration with FOLX because we’ve seen how gender-affirming care can literally be life-saving.

Kai: I’m super grateful to be in a place where you can basically Amazon Prime HRT to your door. And we wouldn’t be here without everyone who came before us.

Carter: The people who came before, including myself, made a lot of sacrifices to get us here. And I don’t just mean the advocacy work and educating doctors, hospitals, and medical offices about trans cultural competency and sensitivity. It’s also fighting for insurance care or if we had insurance, fighting with the company to cover the care we needed.

I remember binding with duct tape because top surgery was [cosmic]. It was a thought that was out of this world. To this day, I still have posture issues and it’s impacted my lungs. I remember taking hormones, but it was just pills that someone said were hormones. We’ve come so far. Just today I was talking with a friend who has a trans kid and they were finally able to get their kid on hormones. But once they got in the call, they told their kid to keep it a secret.

This is the happiest moment of this kid’s life and because we’ve been politicized even parents are very afraid now, not just the kids. Parents now have to get attorneys just in case CPS [Child Protective Services] comes.

So there’s been a lot of work done, but it must continue. We can’t get complacent.

Kai: Right, and it doesn't get better for everyone. It gets better for some people in the community, but other people still don't have access or even have information to access proper gender-affirming care. How do we make sure everyone is taken care of?

Carter: It’s going to take building those communities. And I don’t just mean Black trans people, the community also includes our allies, the donors, the people who want to support what is right. Surprisingly, this conversation is the hardest for our own LGBTQ+ community to digest. 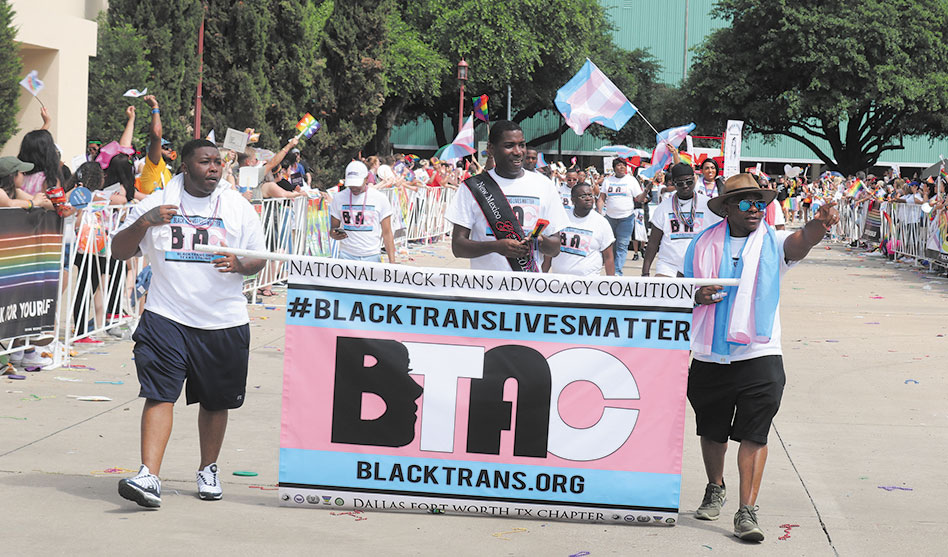 Kai: Absolutely. Being Black and trans is entirely different from being white and trans.

Carter: We have this saying that we’re Black on both sides. Being trans and Black means we are at the bottom of the totem poles, and we’re often operating from a place of scarcity and lacking knowledge and access to information. That’s why we’re often in spaces demanding our voices be heard. We’re tired of being squeezed out. And there’s a lot of money in the LGBTQ+ community. It’s just with a certain group of people.

Kai: Not to mention that LGBTQ+ people are one of the most marginalized overall. I think the average trans person makes $35,000 a year. I can’t help but think that the same dollar is being passed from one person to the next in our community. How do we get corporations to help us out?

Carter: Everyone wants to be a part of change, especially these big corporations as they see more gender diverse people coming into the workplace. It starts with educating the employee resource groups (ERG) and business resource groups (BRG) at these big corporations. Inform them about the landscape of transgender people, of Black transgender people. Show them how they can support and what impact their support is making. We’ll provide the DEI they need for their checkbox. In return, we want to know what jobs are available for trans people. You can’t just educate everyone and not have trans employees. Actual equity is about how many trans people are in management roles? How many trans people are in decision-making roles?

Kai: The work never stops. Switching gears a little bit, you’re a parent. How’s that journey going for you?

Carter: Let me first say, kudos to all parents and even more so to single parents. It ain’t easy. Seeing myself through my daughter’s eyes has liberated me as a trans person in my gender expression. She sees me as a parent, obviously her dad by title, but she doesn’t see me as trans.

At first, I started out acting like how I thought a dad should be. Show my baby girl that big daddy’s got her. But when she comes and asks to brush the doll’s hair with her? I’m not going to say big daddy doesn’t do that. Because at the end of the day, she just wants a parent, and I want to be the best parent to her that I can be. I’m not going to discount her experience because I want to make sure I’m being macho. Now, I’m brushing dolls’ hair, braiding her hair, and painting her nails.

Being the best parent helps me become a better person because I’m not restricting myself with gender expectations.

To learn more about the HRT Care Fund and the Black Trans Advocacy Coalition, check out this page.

Healthcare for Trans Youth is a Basic Human Necessity. Period.