LA-based Urbody is changing the underwear game for transgender, non-binary, and gender non-conforming folks one thong and compression top at a time.

My junk and I have a complicated relationship. As a child, I would tuck my privates in between my legs and look in the mirror at a reflection of who I could’ve been if I didn’t have the parts that came with the AMAB label. Those days were the earliest foreshadowing of my transness I would come into later on in life. My parents claim they knew all along— they also named me Kai, so they might be right.

Now that I’ve started to medically transition with my girls Estrogen and Spiro, I think about tucking every time I put on underwear, and especially if I’m wearing a skirt that day. Some days, I spend hours looking at other trans femmes on the internet wondering how passable I will be, and if that is even my goal.

Luckily, clothing brands have evolved in the last twenty years to support those of us who are transitioning. When I heard about Urbody, a new LA-based genderless underwear company made by and for trans folks, I knew I had to try their line of tops and bottoms. They promised tucking without all the tape and gaffe. I like to call it casual tucking. Could this be another step in feeling more empowered in my femininity?

The idea of underwear for transgender and gender non-conforming people isn’t new. While of course we have been reappropriating Calvin Klien and Victoria Secret for years now, before Urbody there were also brands like  TomBoyX and LuckySkivvies. In the realm of outerwear, Gypsy Sport and Chromat have been creating clothing beyond the binary for years.

More and more brands are realizing the revolutionary potential of unisex clothing, genderless underwear, hoodies for all body sizes,, and fashion that doubles as function. I mean, Gucci just showed binders in their Love Parade collection celebrating the Italian luxury house’s 100th anniversary. Even candle brands are creating genderless underwear.

Could this be another step in feeling more empowered in my femininity?

Urbody launched in the spring of this year and focuses on functional fashion. These are technical garments that go beyond aesthetics and serve more than one purpose. For their line of bikini briefs and thongs that means casual tucking. Their collection also includes compression tops that sit in the middle between a chest binder and sports bra, something that a trans-masc person could wear every day without feeling too constricted. One reviewer says it’s “a really good product in the way that it fits, it sits, and it looks. It feels comfortable and good on the skin. It's very versatile.”

I try on the bikini brief and thong (separately) and immediately they’re hugging me in all the right places. The elastic spandex gives just enough stretch to hold everything in place. The real test would be when I put on a skirt or dress.

After putting on one of my favorite skirts, I look in my full-length mirror and there it is: no bulge. My gender euphoria was through the roof. It was giving. 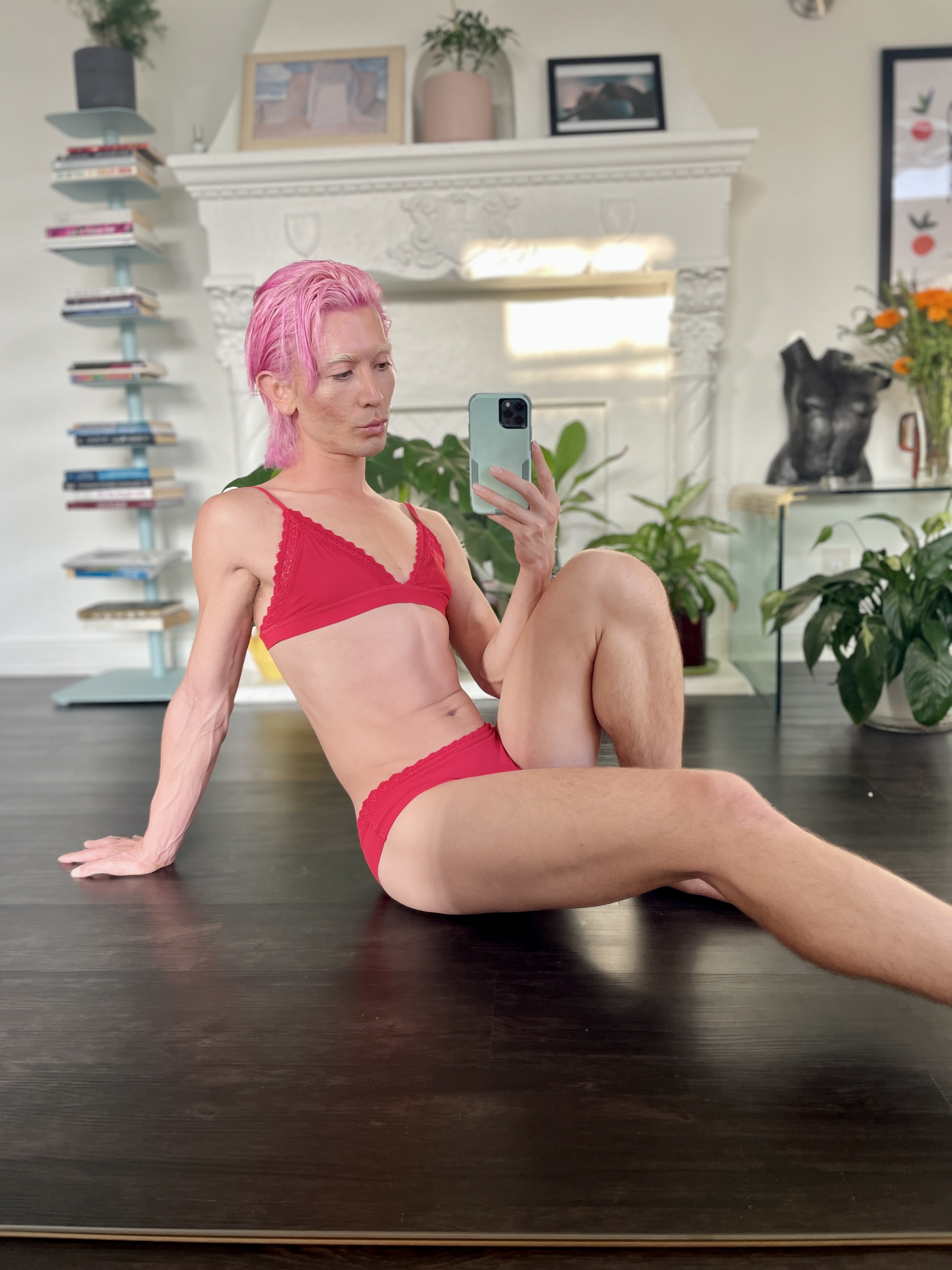 But as I fangirled over my newfound version of femininity, a phrase that Urbody uses on their website came to mind. Gender freedom. I took one small step closer to passing with my new trans-femme underwear, but who was I passing for? We’re living in an age where we’re redefining gender, and while for some this means two distinct binaries, for others the definition is more fluid. Femininity, then, should not be at odds with the presence or lack of a bulge.

Being trans and non-binary has taught me that we’re all performing a vision of ourselves we want to pass as that day, even cis people. We do this at work, on social media, amongst our friends, and on dates. Gender is just one character we can role-play and redefine on this stage called life, and the options are endless if you can let yourself dream. Mainstream definitions of “genderless” often fall into a neutral tone not-feminine, yet not-masculine middle ground, but there’s so much space in between that we can explore. If a trans-femme person chooses to present with a bulge that doesn’t make them any less of a woman than a girl with a full-tuck. Rather than being genderless, we can be full of gender, and by eliminating the binary, it transforms from a battleground to a playground.

I love my Urbody underwear, not just for the physical benefits, but more importantly, for the gender affirmation it gives me. Between the dozens of selfies, I’ve discovered that gender-functional fashion transcends physicality and reaches into emotional and psychological realms of self-expression. Some days, I wear my red lace-trimmed thong and bralette, put on a full face of makeup, and walk out the door in a dress and heels. Other days, I wear my men’s Calvin Klein underwear, no bralette, and let it all hang out. Clothing, like makeup, is just one tool that helps me transform into a version of my gender that I choose. At the end of the day, when I strip away all of the visual presentations, I know that I have the final say on if I’m passing or not according to my own rules.

For a limited time get 25% off any products at Urbody with code Urbody4Folx.

Premature Ejaculation (PME): What’s Going On & What to Do

Stay up to date on all things FOLX.