The FOLX Guide to Hysterectomies

Images were illustrated by Leo Mateus.

This article has been clinically reviewed by Jacob Elliott, RN, Michelle Forcier, MD, and Jess Schwab, DNP. Elliott and Forcier also contributed to this article.

While all different kinds of gender identities can (and do) get hysterectomies, transgender men, nonbinary people, and other gender nonconforming people often get this gender affirming procedure. Whether you are intersex or assigned female at birth, as long as you have a uterus, you’re eligible to receive this kind of gender affirming bottom surgery.

What different types of hysterectomies are there? Are they covered by insurance? What documents do you need to get one? How can you go about getting one? Read on to learn more.

What is a hysterectomy?

A hysterectomy is a surgical procedure that involves removing a uterus. There are different kinds of gender affirming hysterectomy procedures that also can involve the removal of the ovaries and/or fallopian tubes. Hysterectomy may be performed abdominally, laparoscopically, or vaginally. The three common types of hysterectomies are: 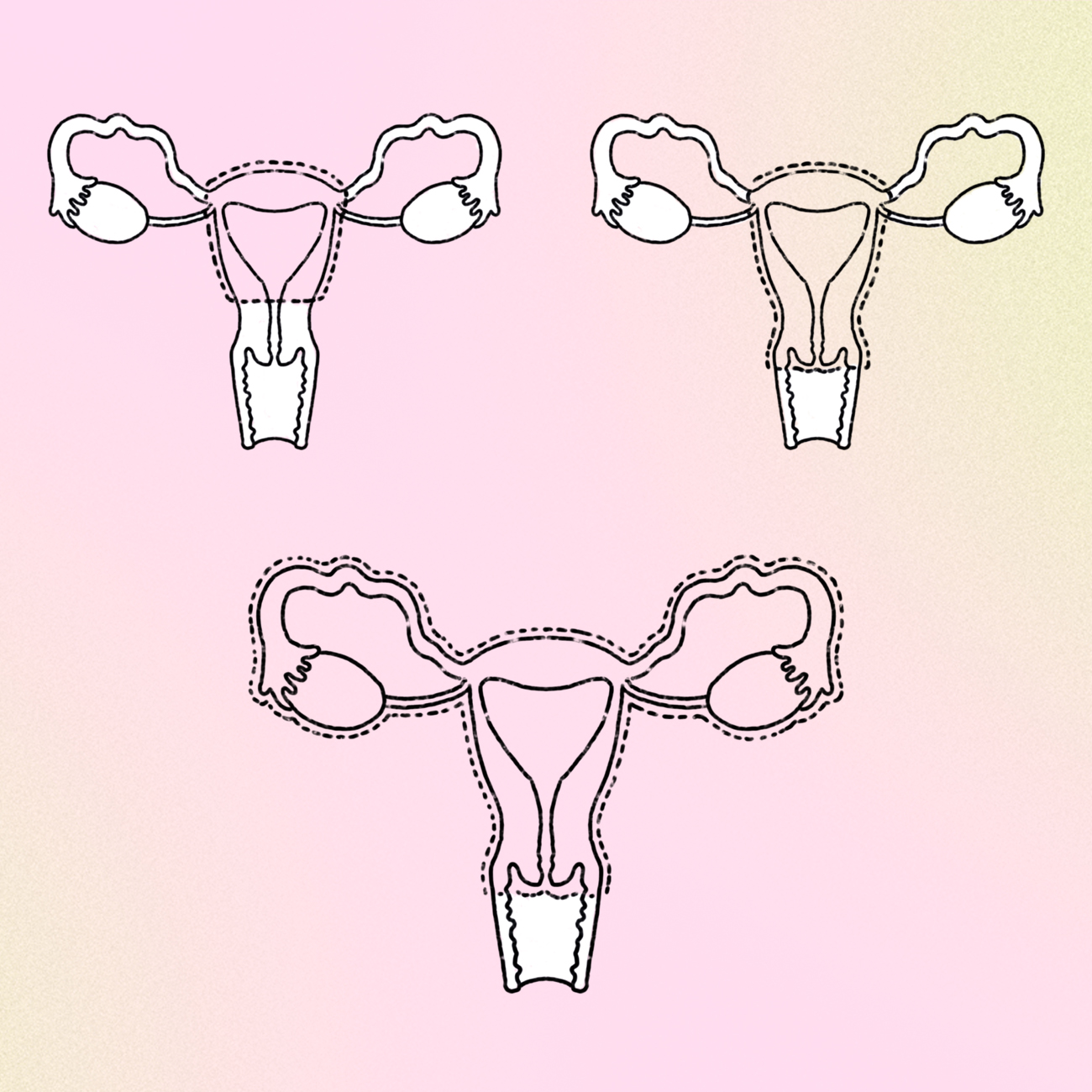 If a hysterectomy is something you’re interested in, here are some additional related medical terms to familiarize yourself with:

Why do people choose to get hysterectomies?

People might decide to get a hysterectomy for a variety of reasons. One common reason is that a person’s uterus simply doesn’t belong to them. For many trans and gender non-conforming people, removing body parts that don’t align with your gender is an important way to affirm their identity.

Others get a hysterectomy because they never want to experience menstruation ever again due to the dysphoric feelings that come with monthly bleeding. For some people who have difficulty stopping periods even with higher doses of testosterone, this can be an important next step.

Some go through with this procedure so they can lower their testosterone dose—or go off testosterone GAHT completely—with more ease knowing their bodies won’t be continuing to produce estrogen and progesterone.

Some people get a hysterectomy knowing that if the cervix is removed, and they’ve never had a history of abnormal pap smears, they might never have to have a pap for cervical cancer ever again.

Others know that they never want to carry a pregnancy and don’t want to worry about birth control. Therefore, there isn’t a need to have a uterus.

However, some people may be interested in family building. Some people may pursue a hysterectomy later in life, such as after birthing children or getting their eggs removed.

What parts should you remove or keep?

Like other medical decisions, it’s up to the individual person to choose which pelvic parts to keep when thinking about bottom surgeries such as a hysterectomy. It’s important to note that if you’re interested in family building and want to maintain the ability to carry a pregnancy or use their eggs, you’ll need to keep both ovaries and the uterus (as well as cervix and fallopian tubes).

You have the option to have both of their ovaries surgically removed during a hysterectomy. However, understand that removing both ovaries results in a loss of fertility.

Bodies—regardless of their assigned gender at birth—need hormones to maintain and regulate our bodily functions. When both ovaries are removed, a main source of estrogen production is also removed.

If both ovaries are removed, they’ll need to plan to take a long-term medication (whether it’s testosterone GAHT or non-hormonal medication) to reduce osteoporosis risk over their lifetime. While there aren't a ton of clinical studies on hysterectomies for transgender people on testosterone, there are some points to consider, the best approach is one that is well-informed and personalized to someone's goals and health.

Retaining one or both ovaries

Some people may already know that they don’t want to be on GAHT for the rest of their lives. For instance, if you’re someone who only wants to be on testosterone for a specific amount of time and obtain permanent changes (like bottom growth and/or voice deepening), you may choose to keep one or both ovaries, so you can safely stop testosterone in the future and maintain their natural hormone production.

Since ovaries produce estrogen on their own, someone can continue hormone production (via estrogen) whether or not testosterone GAHT is being taken; therefore, this can make it easier for someone to stop testosterone without the need for hormone replacement for bone, brain and heart health. Because there is some medical evidence that people on testosterone GAHT with one or both ovaries have better bone health/bone density, this approach allows for flexibility if someone wished to take a break from or stop testosterone.

“[Someone would keep one or both ovaries if they want to] retain fertility, decrease risk of osteoporosis (good for folks with family history of osteoporosis), stop testosterone or significantly decrease their dose while maintaining a hormonal balance, and/or decrease risk of front hole dryness and atrophy without the need for low dose estrogen,” explains Elliott. 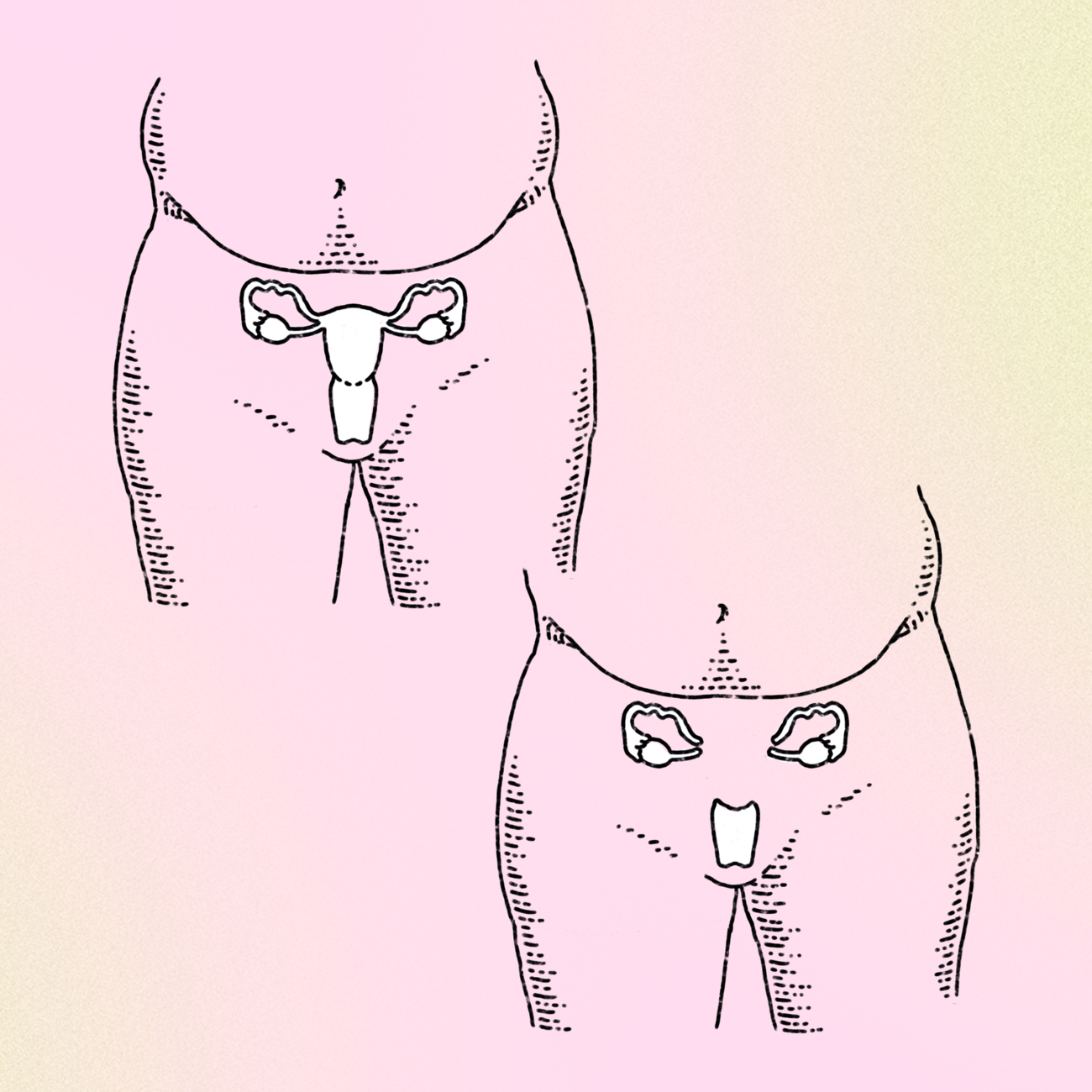 How can I get my hysterectomy covered by insurance?

Most who are able to consent to medical decision making on their own—those years of age 18 and older—can talk to a gynecologist about hysterectomy. Sometimes, it’s difficult talking to medical providers about hytos if they make assumptions, such as a) everyone must or might want to carry a pregnancy, and b) that young people with uterus cannot decide their future (in)fertility for themselves. Finding a gynecologist that understands gender diversity and practices bodily autonomy and gender affirmative care can make this process lots easier.

The cost of a hysterectomy varies based on which specific procedure you pursue, where you live, what surgeon you choose, which medical center it’s performed at, and the insurance you have (or don’t).

Hysterectomies can greatly alleviate gender dysphoria and promote mental health for some transgender people. However, insurance companies don’t always agree and we’re here to provide some information to help you combat this reality.

According to the cisheteronormativity of the Western medicine, certain people assigned female at birth may have pre-existing conditions that make a stronger case for a hysterectomy, including people with polycystic ovary syndrome (PCOS), endometriosis, abnormal bleeding, and enlarged fibroids. Those pursuing a gender affirming hysterectomy with these conditions may have an easier time navigating the procedure as well as interactions with insurance. Remember, both cis and trans identified people who can consent to care can have these organs removed for problems with menstrual periods, abnormal bleeding, and problems with pain.

Additionally, those with an “M” gender marker on their medical and legal documents might experience confusion and barriers with insurance, providers, and other institutions. “How can a man have a hysterectomy?!” It might take an additional conversation, phone call, and/or letter to the insurer to clarify why someone with a “M” gender marker really should have this surgery. FOLX members are encouraged to contact their clinicians for support in situations like this.

Despite the obstacles, it’s still very possible to have your hysterectomy covered by insurance. Different private insurance plans as well as different states’ Medicaid or Medicare plans might have specific gender surgery inclusions or exclusions. Private insurance plans vary according to what the employer includes in the coverage. Public insurance varies according to state. Some people search carefully and base their choice of health care plan on whether or not gender affirming surgeries are covered. Per Hysto.net: “For patients covered by health insurance, out-of-pocket costs can range from co-pays of $100 or more and between 10 percent to 50 percent of the cost of the procedure.”

Even if a hysterectomy is covered by insurance, there still might be some costs in terms of deductibles and copays, as well as lost time at work to take into account. If you’re a FOLX member pursuing a gender affirming hysterectomy, regardless of your gender marker, we encourage you to notify your clinician. Our clinical team is here to help support you.

What do I need to get a gender affirming hysterectomy?

Similar to other gender affirming bottom surgeries, people typically need usually two referral letters to pursue a hysterectomy, according to WPATH Standards of Care and insurance guidelines. Unlike male chest construction or top surgery, removing something related to childbearing usually means two letters are required by both the surgeon and the insurer. Most of the time, one letter may come from a medical provider, while one letter must come from a qualified mental health provider, such as a licensed therapist or psychiatrist.

FOLX clinicians can write referral letters as hormone therapy providers. If you’re a FOLX member, we encourage you to start the conversation with your clinician by scheduling an appointment and/or sending them a message in your Athena PatientPortal.  If you’re not a FOLX member but interested in this service, sign up here.

What does surgery aftercare look like following a hysterectomy?

Recovery time and aftercare needs will vary depending on the type of hysterectomy you choose. Regardless of the type of procedure, though, it’s important to have aftercare help lined up ahead of time. Plan to rest for at least a week and more if you have had a more invasive procedure. We highly recommend seeking out support from your individual and community networks to have an in-person caregiver during your recovery period. FOLX members can discuss after care options with their clinicians.

An abdominal hysterectomy is the most invasive option, because it involves a large incision in the lower abdomen; this requires about six to 12 weeks to fully recover. With this surgery, walking is limited and driving isn’t recommended during recovery to allow the incision and muscles heal. Both total laparoscopic hysterectomy and laparoscopically-assisted front hole hysterectomy are minimally invasive procedures and tend to require anywhere from two to four weeks to fully recover. WPATH recommends laparoscopic surgery for folks who haven’t previously had abdominal surgery in order to avoid unnecessary scarring.

Laparoscopic procedures use carbon dioxide gas to expand the abdomen in order to give the surgeon a better view while they work. Although the surgeon will remove as much gas as possible prior to suturing any incisions, it’s fairly common for some residual gas to be left, which can lead to what’s known as post-laparoscopic, or laparoscopy-induced shoulder pain. This pain is due to carbon dioxide causing irritation of a nerve shared by both the diaphragm and the shoulder. There are a few things you can do to help reduce this pain, including taking a hot shower (but not a bath), lying on your side, using a heating pad, and provided it is safe to do so, walking around.

Regardless of which type of hysterectomy you pursue, one thing that happens is the settling of your remaining organs. Not everyone will notice this phenomenon, but it can be a little unsettling—pun intended—for those who do. Putting pressure on your abdomen through the use of an abdominal binder can help decrease pain and discomfort associated with this. The binder should be placed over a shirt to avoid catching on any surgical incisions or sutures, and should not be so tight that it affects your ability to breathe regularly. Always check with your surgeon first to confirm it’s safe to use an abdominal binder.

What comes after a hysterectomy?

Some who’ve received a hysterectomy may want to pursue other gender-affirming bottom surgeries. Transmasculine people, for instance, may want to pursue phalloplasty, or gender affirming reconstructive surgery that can include the creation of the penis, lengthening the urethra to help you stand to pee, creation of the tip (glans) of the penis, creation of the scrotum, removal of the vagina (vaginectomy), and placing erectile and testicular implants. If you already know you’re interested in phalloplasty before starting your hysterectomy journey, it can potentially be performed in the same procedure as a hysterectomy.