What is PrEP? Prescription HIV Prevention 101

For those of you who don’t know, “PrEP” stands for “pre-exposure prophylaxis.” PrEP is a type of medication taken before possible contact with the Human Immunodeficiency Virus, or as you might know it, HIV. HIV is a virus that can weaken the immune system by attacking certain white blood cells, which are also called CD4, T lymphocyte, or helper cells.

The most widely known and used method to stop HIV by far is PrEP, a daily pill approved by the FDA. Additionally, there are two other methods that are used as-needed: PrEP 2-1-1 and PEP. You might not have heard of these methods, as they are less widely prescribed and have much more narrowly defined windows to be effective. Across all forms of PrEP, cost has been the biggest barrier to access (i.e. $2,000 for a 30-day supply of daily PrEP), especially to those without health insurance, but, this year, with the expiration of the patent for Truvada, things have started to change. According to the Center for Disease Control and Prevention, in 2020, approximately 25 percent of the 1.2 million people for whom PrEP is recommended were prescribed it, compared to only about 3 percent in 2015. We are on our way there, but still have a ways to go.

Read on for answers to FAQs about PrEP medication and other methods of HIV prevention.

What is PrEP (pre-exposure prophylaxis) in HIV prevention?

Truvada (generic name emtricitabine-tenofovir disoproxil fumarate, try saying that ten times fast, or “TDF/FTC,” for short) has been studied and proven effective for both people with penises and people with vaginas when taken daily; however, we don’t have much public health data on exactly how effective PrEP is for folks with neovaginal, colon neovaginal, peritoneal neovaginal, or penile-inversion neovaginal tissues. A newer study has found that TDF/FTC is safe and effective for people on HRT.

Up until recently in the United States, there were two brand name versions of PrEP medication: Truvada and Descovy. In 2020, there was one generic version of TDF/FTC available in the US, however, only one manufacturer was given the license so their cost wasn’t much lower than the brand name Truvada. Now, more manufacturers are getting the ability to produce generic Truvada, including FOLX partners, which means that the cost is starting to come down. In 2021, the patents expired, and thus the costs of PrEP lowered significantly.

Descovy is only available as a brand name medication, and it’s important to know that Descovy has not been studied for HIV prevention during vaginal sex or with injection drug use. Also, as of 2021 cabotegravir (CAB), a form of PrEP that would be injected bimonthly, pending approval from the Food and Drug Administration (FDA).

Who is eligible for PrEP?

The chances of getting an HIV infection vary depending on the circumstances. In simplest terms: an HIV infection can occur only if one comes into contact with the virus through bodily fluids such as blood, semen, pre-ejaculate, vaginal fluids, rectal fluids, and human milk.  It’s not something that happens spontaneously.

However, some people who are currently HIV negative may be more at risk than others of contracting HIV. Those most at risk for contracting HIV are those who:

What are the benefits of PrEP?

Does PrEP have side effects?

The side effects of taking PrEP medication can include diarrhea, nausea, headache, fatigue, and stomach pain. Often, these are mild side effects that generally go away after the first month on PrEP. If side effects don't pass, please speak to your health care provider. Taking the pill with a snack or meal at bedtime can help with side effects.

What is the difference between PrEP and PEP? 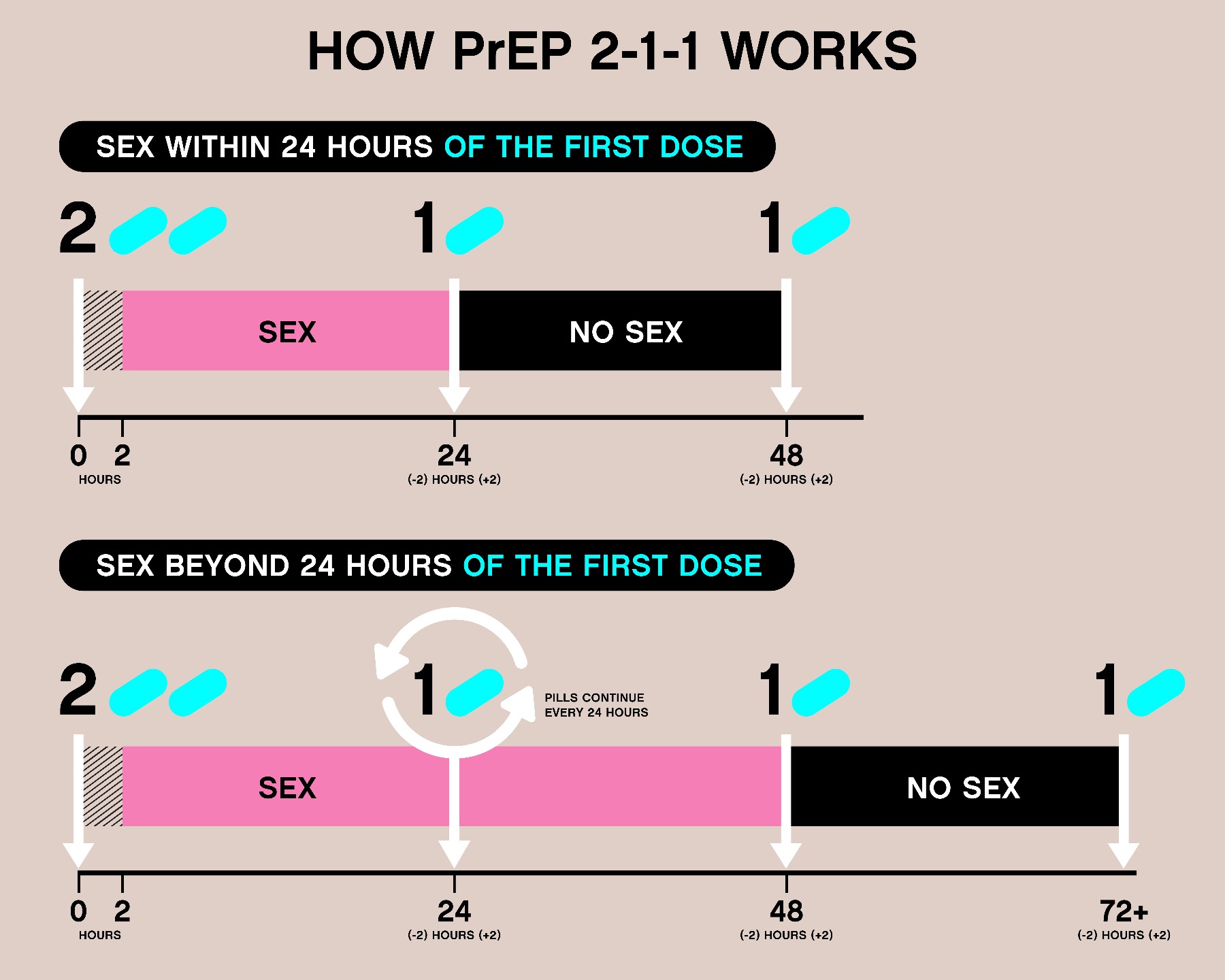 The emergency option for preventing HIV after a possible exposure is PEP (or post-exposure prophylaxis). PEP is begun within 72-hour after possible exposure to HIV (whether through sex or injection drug use). It consists of the HIV medications Tenofovir and emtricitabine, intended to be taken with a third HIV drug, raltegravir or dolutegravir. PEP is taken daily for 28 days and, the sooner it is started, the more effective it is. PEP doesn’t replace PrEP or other HIV transmission prevention methods; while PEP can be effective at preventing infection, it’s not 100 percent protective.

Access to PEP varies across the country. Unlike in major cities like New York, PEP is not readily available in many hospitals or clinics nationwide. Oftentimes, health care providers have a limited amount of PEP that is often exhausted within the first few months of a year. In some cases, medical professionals are accused of withholding PEP because they believe PEP encourages “unsafe behavior" sometimes otherwise noted as "high risk" or "risky behavior"; meanwhile, the same providers may also save PEP for sexual assault survivors. Understand that this belief—that sexual violence survivors are more worthy than queer and/or trans people of receiving PEP—is typically rooted in queer and trans antagonism; it also ignores the fact that a trans and/or queer person cannot be a sexual violence survivor as well.

In other instances, PEP might only be available at a clinic or doctor’s office, which can be an issue if PEP is needed during a weekend when clinics and offices tend to be closed. Some states are working toward making PEP available over the counter without a health care provider's note, but even then, PEP can be unaffordable for the people without health insurance plans (including Medicaid) or access to assistance programs.

Knowing those barriers, the two main options to acquire a PEP prescription are:

Although currently there is no available cure for HIV, there are treatments known as anti-retroviral therapy (ART) that lower the amount of HIV virus in the body to an extremely low level. This means that their immune system is able to prevent illness and symptoms, and makes it impossible to pass the infection on to other people. These medicines make it possible to live with HIV and manage it like other chronic conditions, such as diabetes or high blood pressure.

Are you interested in PrEP (pre-exposure prophylaxis) with FOLX? The process begins here.
For existing FOLX members interested in adding a PrEP medication to their plan, reach out to your clinician through your Athena patient portal or reach out to our member advocates at support@folxhealth.com.
For non-FOLX members who want to learn more, read up on all things sexual health here. Feel free to reach out to us at support@folxhealth.com if you have any further questions!